You are at:Home»Advisor Solutions Channel»How Long Will It Be Until Bitcoin Replaces Cold Hard Cash? 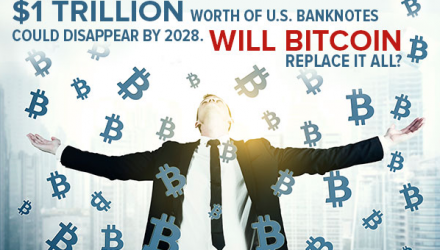 How Long Will It Be Until Bitcoin Replaces Cold Hard Cash?

Bitcoin is back in the news in a big way. The world’s largest cryptocurrency neared $10,000 last week, meeting strong 200-day moving average resistance of around $9,800. Also last week, the 17 millionth bitcoin was mined. Remember, the crypto was originally designed to have a limited supply of “only” 21 million, an attractive feature that should continue to burnish its value as we get ever closer to that ceiling.

It’s no coincidence that the rally we’re seeing right now began soon after Tax Day. Many bitcoin and altcoin investors likely liquidated some of their holdings ahead of the filing deadline to cover capital gains taxes from last year and are now getting back into the trade. Month-to-date as of April 27, bitcoin was up more than 33 percent.