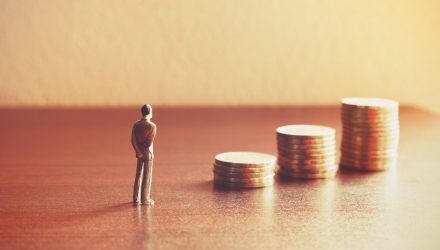 More conventional fixed-income benchmarks such as the iShares Core U.S. Aggregate Bond ETF (AGG) peaked by September when interest rates made a significant low. Conversely, HYG continued to hit new dividend adjusted highs all the way through the first week of 2018.

Despite this relative stability, investors have been reigning in their exposure to junk bonds via these popular ETFs in recent months. Data from ETF.com indicates that HYG has seen -$2.7 billion in outflows to start the year, while JNK has lost -$3.6 billion.

Those numbers represent a sizeable change in total fund assets and may be driven by expectations of credit spreads widening alongside historical correlations with a downturn in the markets.

High yield investors exiting these ETFs may also have some concerns that the recent fall in energy prices (and energy stocks) will meaningfully impact this sector.

The 2015-2016 decline in commodity prices left a significant dent in the high yield space because of wide-spread selling and credit fears. It’s worth pointing out that energy makes up less than 10% of the sector allocation within HYG at present.

It’s too early to say whether high yield investors have indeed dodged a bullet and the coast is clear to higher highs. The compression in credit spreads alongside the persistence of interest rates is a worrisome aspect that investors will have to contend with.

Nevertheless, the resilience of this asset class through the month of February is perhaps one bright spot that both stock and bond investors can identify with.

The following post was republished with permission from FMD Capital.