You are at:Home»Advisor Solutions Channel»El-Erian Sees Fed Focused on Balance Sheet Flexibility ‘Like a Laser’ 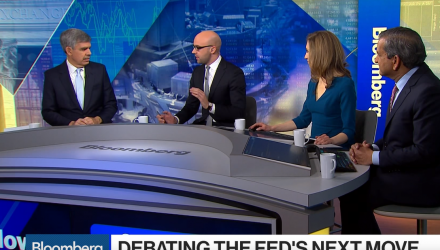 On Wednesday, the Federal Reserve released its minutes from its Jan. 29-30 policy meeting in which it voted unanimously to hold its policy rate in a range between 2.25 percent and 2.5 percent. “Patience” has been a constant buzzword in the Fed’s vocabulary as of late and in the minutes released, leaning towards a patient approach to interest rates was confirmed.

Investors and traders alike were no doubt dissecting the Fed minutes to extrapolate their own interpretations from it.

In the video below, Bloomberg Opinion columnist Mohamed El-Erian, Krishna Memani, chief investment officer at OppenheimerFunds, and Bloomberg’s Lisa Abramowicz discuss expectations for the latest Federal Reserve meeting minutes. They speak with Bloomberg’s Jonathan Ferro on “Bloomberg Markets: The Open.” El-Erian’s opinions are his own.