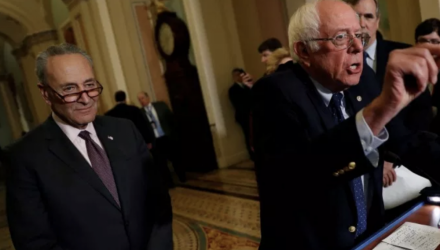 Senators Bernie Sanders and Chuck Schumer have proposed legislation that would stop public companies from paying dividends or buying back their shares unless they first meet certain conditions.

The senators aren’t worried about viability (companies are financially stable before they send cash back to their shareholders). Instead, they want to verify that companies have done enough to support employees before they give anything back to investors.

That’s not so subtle code for, “Make sure you redistribute wealth before giving anything back.”

The senators make their case by pointing to last year’s tax reform and how much of the corporate windfall was spent on stock buybacks (almost $1 trillion), even as companies refused to invest, closed locations, and fired employees.

But in making their point, Sanders and Schumer…

Companies don’t choose to buy back shares or pay higher dividends because investors demand it. They take those actions because they think it’s the best use of investor money. And that’s the crux of the issue.

Who owns the cash? Is it yours as an investor, or do workers have a claim on it, as Sanders and Schumer suggest?

When I save some of my income and invest it in corporate stocks, I’m pretty sure that it’s my money. It doesn’t magically become partially owned by someone else just because I chose to invest.