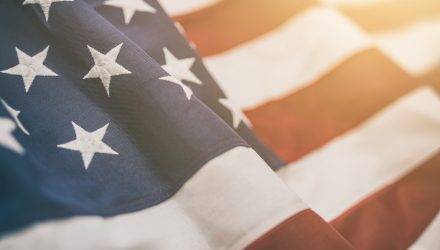 The top four aerospace and defense ETFs are reacting to President Donald Trump’s plan to bring U.S. troops in Syria back home as he believes “our primary mission” of fighting the Islamic State terrorist group is “almost complete.”

“I want to get out, I want to bring the troops back home, I want to start rebuilding our nation,” Trump said Tuesday during a news conference at the White House with leaders of Baltic nations.

Trump did not approve a specific withdrawal date at Tuesday’s meeting, the official told Reuters. He wants to ensure Islamic State militants are defeated but wants other countries in the region and the United Nations to step up and help provide stability in Syria, the official said.

However, Pentagon officials have made it clear they do not want to pull out of Syria and risk enabling President Bashar al Assad and his allies Russia and Iran to take control.

Let’s take a look at how the top 4 ETFs  Aerospace & Defense ETFs are trading Wednesday as of 12:15 p.m. Eastern Time.

The longer the U.S. is at war, the more money will be spent on aerospace and defense companies. Without a war, people may begin to sell their shares and invest their money elsewhere.  We can see that the top 4 Aerospace and Defense ETFs are all down after Trump’s announcement.

Trump’s campaign for the White House has always called for an “America First” foreign policy.

At a rally in Ohio last week, Trump said “we’re knocking the hell out of” Islamic State and he predicted a U.S. departure from Syria “very soon.” He added, “Let other people take care of it now.”

The U.S. has deployed about 2,000 troops on the ground, including U.S. special operations forces whose advising has helped Kurdish militia and other U.S.-backed fighters capture territory from Islamic State.