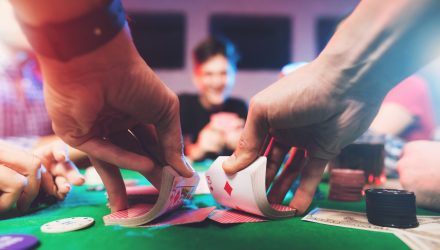 How to Improve Decision-Making with Annie Duke

On last week’s podcast—alongside my co-host, Wesley Gray, the CEO of Alpha Architect—I had the privilege of interviewing retired professional poker player Annie Duke about her new best-selling book, Thinking in Bets: Making Smarter Decisions When You Don’t Have All the Facts.

Duke has an interesting background for a former professional poker player. Her journey to poker started close to our interview location—on Penn’s campus—where she was working toward her doctoral degree in psychology before she became sick and missed the window in which degree candidates have their recruiting and job talks. She ended up playing poker from 1992 to 2012 as a diversion from her studies and ended up never going back to finish her doctorate.

We discussed whether she has an itch to come back to Penn and finish her doctorate, and she stated that she had an 82% probability of doing so—and that probability has been inching up.

Framing this decision as 82% for finishing her doctoral degree and 18% against is an important illustration of how Duke thinks we should all depict a more accurate representation of the world. The future is uncertain and probabilistic—people like to know their lives will turn out a certain way, and we all tend to be addicted to certainty.

While Duke does not know it really is an 82% probability, she feels describing the future in this manner is far superior to saying she has a 50/50 chance of doing so or 0%/100% chance. This has the advantage of not putting herself as being “right” or “wrong,” but, rather, if she does not do it, it was just in the 18% probability of outcomes that played out.

One of the major focuses of Duke’s book is a concept called “resulting.” The problem with resulting is that too often people look at bad outcomes and conclude it was caused by a bad decision process—hence a focus on the poor results and not the decision process.

Conversely, it could be that one concludes a good outcome was the result of a sound process—when it was just luck or the lower end of a probability range like 82% versus 18% and the 18% chance event occurred, even though it was not the most likely outcome.

Talking in Probabilities: The Benefit of Keeping an Open Mind

Duke believes there is a big problem in confusing confidence and certainty. People often think that leaders need to express themselves in absolute certainty to be very convincing. There are two sources of uncertainty: luck, which we cannot do anything about, and hidden information. When one talks in probabilities, you open yourself to looking for new information and updating your forecast.