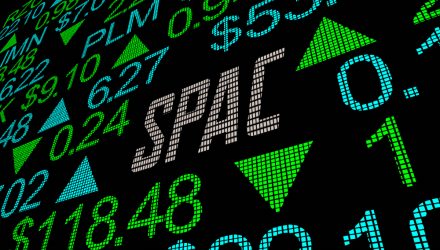 In the Downright Dizzying World of SPACs, Consider This New ETF Take

Amid a recent flurry of initial public offerings (IPOs), special purpose acquisition companies (SPACs) may be back in style again. Sort of.

In the first half of the year, blank-check firms endured a cooling off period as many saw shares slide below the $10 floor. Market participants increasingly scrutinized the post-deal performance of a slew companies that came public via SPAC mergers. They didn’t like what they saw.

Still, SPACs aren’t going anywhere, and new investment vehicles are bringing some level of perceived democracy to the IPO process.

The stage has been set for the newly minted Robinson Alternative Yield Pre-Merger SPAC ETF (SPAX). The actively managed SPAX debuted late last month and could find a receptive investor audience as blank-check activity picks up again. The ETF may be a credible catch-all for investors who are not

“Offering an alternative way for companies to go public, SPACs themselves are publicly traded investment vehicles whose purpose is to bring target companies public through the process of a merger. SPACs are incredibly complex vehicles and can differ widely in size, structure, and quality, among other things,” according to Charles Schwab research.

One of the marquee perks of SPAX is that, at least for now, it’s the only dedicated SPAC ETF that focuses on pre-deal blank-check firms.

That’s important because many SPAC stocks rally upon announcing identification of a merger partner. Blank-check companies have two years to find a target or risk being liquidated, so there is a shelf life these companies contend with. Moreover, SPAX may be useful for investors because the current SPAC universe is downright dizzying. There are 575 domestic SPACs, 425 of which are searching for deals, according to SPAC Track data.

“Almost 180 SPACs were announced in February 2021; again, the number of companies launched in the first quarter of 2021 exceeded the total seen in all of 2020,” adds Schwab.

SPAX is a consideration for SPAC-interested investors for another reason: history shows that’s the pre-deal period is the optimal time to own a SPAC.

“In general, SPACs have seen their strongest gains from the time of their IPO up until they find a merger target; conversely, their weakest performance has come after a successful merger,” continues Schwab. “Researchers found that between 2010 and 2020, buying a SPAC at its IPO and selling it at the time of merger would have yielded a return of 9.3% annually. For SPACs held for a year after a merger, the annualized loss was 15%.”