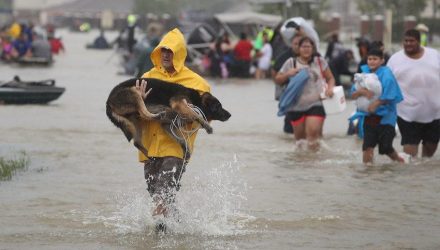 Unless you’ve been away from a TV, computer or smartphone for the past week, you’ve likely seen scores of pictures and videos of the unprecedented devastation that Hurricane Harvey has brought to South Texas and Louisiana. As a Texan by way of Canada, I’d like to take a moment to reflect on the human and economic impact of this storm, one of the worst natural disasters to strike the U.S. in recorded history.

Below are some key data points and estimates that help contextualize the severity of Harvey and its aftermath.

In a previous Frank Talk, “11 Reasons Why Everyone Wants to Move to Texas,” I shared with you that the Lone Star State would be the 12th-largest economy in the world if it were its own country—which it initially was before joining the Union in 1845. Following California, it’s the second-largest economy in the U.S. A huge contributor to the state economy is the Houston-Woodlands-Sugar Land area, which had a gross domestic product (GDP) of $503 billion in 2015, according to the U.S. Bureau of Economic Analysis. Not only does this make it the fourth-largest metropolitan area by GDP in the U.S., but its economy is equivalent to that of Sweden, which had a GDP of $511 billion in 2016.

The amount of rain that was dumped on parts of Southeast Texas set a new record of 51.88 inches, breaking the former record of 48 inches set in 1978. But now we believe it exceeds that of any other flood event in the continental U.S. of the past 1,000 years. That’s according to a new analysis by the Cooperative Institute for Meteorological Satellite Studies and Dr. Shane Hubbard, a researcher with the University of Wisconsin-Madison. Hubbard’s conclusion required the use of statistical metrics since rainfall and flood data go back only 100 years or so, but the visual below might help give you a better idea of just how rare and exceptional Harvey really is.