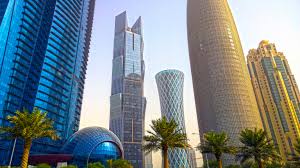 Trump Teams Up With Qatar: Time to Consider QAT?

President Donald Trump is hosting the ruling emir of Qatar for a White House meeting Tuesday, who has since taken steps to address US concerns, even allowing Treasury Department officials into its central bank to improve accountability to prevent terror funding. It may be time for investors to consider QAT.

Trump Teams Up With Qatar: Time to Consider QAT?

Al Thani told reporters in the Oval Office, “We do not and we will not tolerate with people who fund terrorism. We’ve been cooperating with the United States of America to stop funding terrorism around the region.”

According to The Times of Israel, “The White House said it would focus on strengthening ties, including security and economic issues. In a phone call last week, Trump credited the emir with working to counter terror financing and extremism. The White House said they also discussed concerns about Iran’s “increasingly reckless behavior in the region” and the need to resolve the Gulf crisis.”

Qatar is set to enter the international bond markets meeting with  UK and U.S. investors from April 9-11 ahead of issuing five-, 10- and 30-year dollar notes.

“We are still doing very well and will make sure economic growth outpaces that of the region,” Finance Minister Ali Sherif al-Emadi said according to US News, forecasting private sector growth of 4 percent in 2018.

He said Qatar was moving on fast with spending in preparation of hosting the 2022 World Cup to project itself on the global stage – and that 90 percent of infrastructure work for the event would be completed by 2019.

On Monday, the State Department notified Congress that it had approved the potential sale of $300 million in advanced rocket systems to Qatar, which a statement called “an important force for political stability and economic progress in the Persian Gulf region.”

Although Qatar is tiny, the county’s economic power is soaring.