You are at:Home»Equity ETFs»Getting Defensive With Healthcare ETFs as Congress Moves to Replace Obamacare 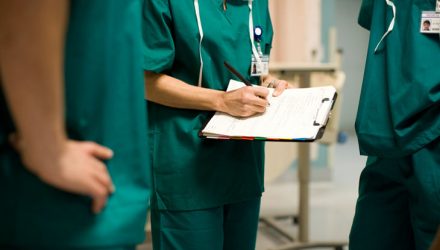 Getting Defensive With Healthcare ETFs as Congress Moves to Replace Obamacare

“Since 1995, S&P 500 large-cap health care stocks have typically traded at a 10% premium to the market. Today they trade at nearly a 10% discount, close to a six-year low (see chart below). To some extent this drop in relative valuation is justified. Profitability is down from the glory years of the late 1990s when pharmaceutical companies were churning out a record number of blockbuster drugs. Currently the return on equity is roughly 18%, below the 22-year average of 20%. Still, profitability has been improving in recent years and is currently at the highest level since 2013,” according to BlackRock.

For healthcare ETFs, the good news is that the U.S. economy moving into the late-cycle phase, overall growth may slow and signs of an economic slowdown could pop up. Consequently, investors may also turn to defensive sectors that are less economically sensitive, such as health care. The sector can also be resilient to rising interest rates.

“However, given lower financial leverage compared to other defensive industries, health care is less sensitive to rising rates. For example, since 2010 the level of the 10-year Treasury has explained roughly 20% of the relative value of the health care sector. However, during the same period the level of long-term rates has explained nearly 70% of the variation in the relative value of the consumer staples sector. Put another way, trading consumer staples has been overwhelmingly a play on interest rates,” according to BlackRock.