You are at:Home»Alternative ETFs»Reasons Gas ETF Is On the Rise Again

Reasons Gas ETF Is On the Rise Again

Although consumer prices and inflation are at lows not seen in decades, gas and its related exchange traded fund (ETF) don’t seem to have gotten the message. What gives? And will it last?

While oil is down to about $35 a barrel, gas prices have ticked up 17 cents in the last month, says Dan Grech for Marketplace. The average cost of a gallon of gas is now around $2, which is still a far cry off the highs reached last summer, but still mystifying.

Philip Verleger, an oil economist at the University of Calgary, says the primary factor in the price jump is that refiners have cut their supply, which is allowing them to charge gas stations higher wholesale prices.

In the latter half of 2008, refiners saw their profits sink to as low as 6 cents a gallon. If the refiners don’t make enough rate of return on their product, they’ll go bankrupt, which is what happened to one last week.

The price jump could be temporary. If oil stays below $40 a barrel, gas could sink back down to an average of $1.55. 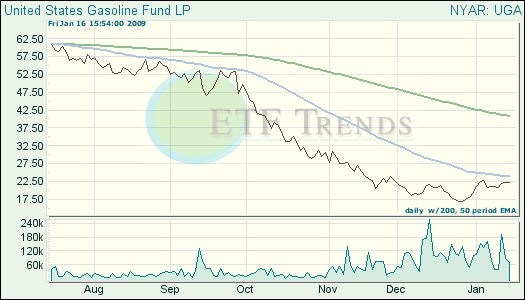