The plan, in short, is meant to show that the government is ready to take any steps necessary to prevent the credit crisis from taking over the financial markets. The Federal Reserve said it would lend money to Fannie and Freddie if needed, reports Jeannine Aversa for the Associated Press. Last week, Treasury Secretary Henry Paulson said no to plans of a bailout, but the market’s reaction might have changed that thinking.

Markets around the world reacted in differing ways to the plan. Most Asian markets gained, then lost those gains. European markets were up, and major indexes in China and the Philippines were higher, too. One analyst says the government’s commitment to Fannie and Freddie is a confidence boost for global markets, says Louise Watt for the Associated Press.

Even with renewed commitment from the government, though, analysts are still predicting that more banks are going to fail. While the nation’s banks are in less danger than they were in the late 1980s and early 1990s after the savings and loan crisis, it’s still not pretty.

Our current troubles are growing so rapidly that 150 out of 7,500 small and mid-size banks around the country could fail over the next 12 to 18 months, reports Louise Story for the New York Times.

Brett Steenbarger for Seeking Alpha wonders how many other failures are out there, too. He took a look at the year-to-date performance of every publicly traded bank and savings and loan institution and found that those doing the best in their sector appear to have conservative lending practices, no subprime residential loans and no major problem loans to over extended real estate developers. Granted, none of these banks were really in “hot” real estate markets. 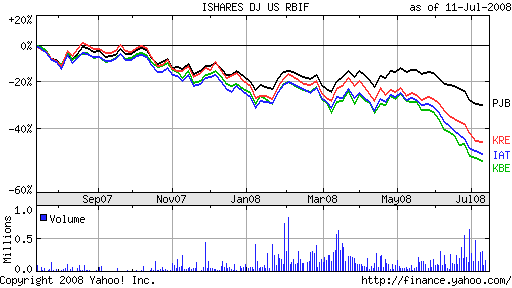